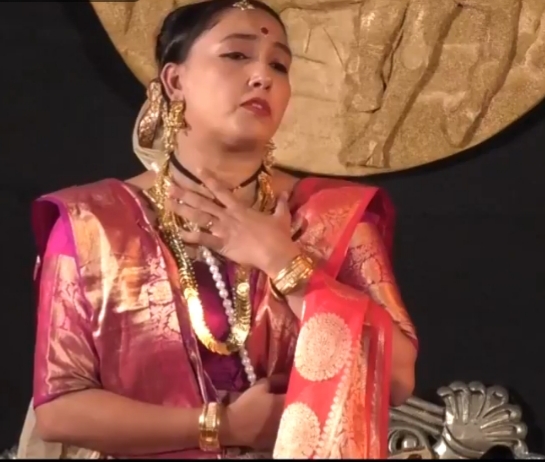 The festival was dedicated to Girish Karnad, Irfan Khan, Usha Ganguli and Bijay Mohanty, the four theatre personality who passed away recently.

While Nayeeka (dir:Sourav Gupta) by Nandanik mesmerized the audience through its romantic expression of Ramakanta Rath’s poems, Sujaner Golpo (dir: Sangita Chakrabarty) , based on Satyajit Ray’s story was a treat for young audiences. Dhruvswamini (dir: Surabhi Biplove) introduced audience to famed Hindi author Jaishankar Prasad and Terav (dir: Harish Ethape), a play in Marathi portrayed the extraordinary efforts by the wives of the distressed farmers of Maharashtra.

All the plays were aesthetically presented and pulled a huge viewership. The plays were streamed in premiere mode through Nandanik’s Facebook page and shared widely across multiple platforms. All the plays received huge virtual reach, the highest being 8,000 plus and lowest being 400 plus. On an average the reach of each event was 2,000 plus.

“We are happy that even during the troubled time of Covid-19, theatre artists of 8 organizations of different States came together and supported us to create some vibration when theatre has become non functional due to health norms. We expect normalcy to resume soon and get back to action.” said secretary & convener of the Nandanik Theatre Festival Monideepa Gupta

“Online is not an alternative to real theatre, it can never be. We wanted to create a vibration in theatre artists who are depressed and take their artistic work to the audience because that is what an artist strives for. We are happy that this was for the first time in Odisha and our efforts received support & appreciation. The virtual reach and views is beyond expectation and it will provide some solace to the participating groups, I believe.” said Nandanik creative director Sourav Gupta.

“We started the festival 5 years back to expose the people of Koraput to national theatre and I am happy that through online mode our festival has reached audience throughout the globe. This programme has placed the name of Koraput in global circles” said Nandanik treasurer Saumendra Kr Swain.

Established in 2014 by Sourav Gupta and Monideepa Gupta, Nandanik has produced 10 plays in Odia based on classics, literature and folk and organized events in collaboration with Sangeet Natak Akademi, New Delhi and Eastern Zonal Cultural Centre, Kolkata. In a very short span of time Nandanik has placed Koraput in theatre map of India.