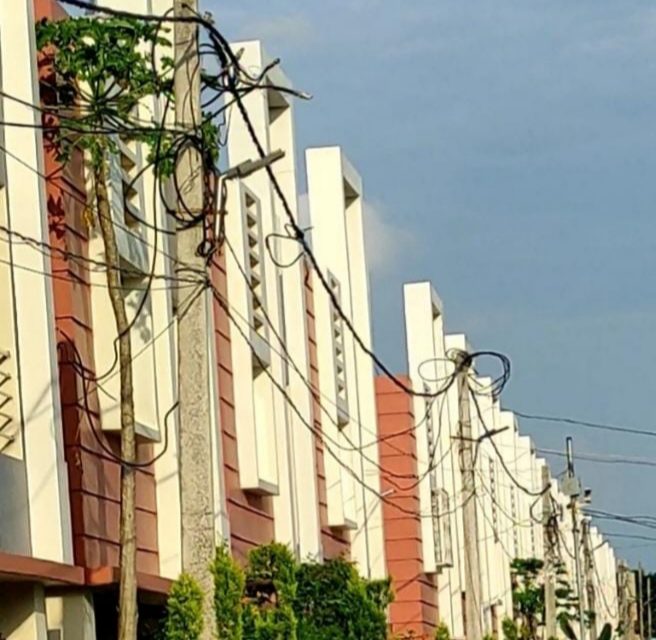 Bhubaneswar: It is a systematic power theft by elite people living in a posh duplex housing society in Bhubaneswar city which the officials of the distribution company TPCODL stumbled upon last week.

During an inspection, 18 houses in a posh duplex society at Padasahi under Barang electrical section were found to have made permanent arrangement for power theft and have been drawing power illegally for quite some time.

The complex houses approximately 150 duplex houses and another 50 are under construction. It was found that the builder / contractor of the complex had laid down his own single core insulated cable along with the official overhead LT cable laid by TPCODL. It was found that the builder tampered with LT network at one of the poles and connected the insulated cable with the same. A total of 18 duplex houses were connected to the said insulated cable and were drawing electricity without any meter. This apart the sales office of the builder at the society was running in a parallel hooking line and one Super Mart (departmental store) was running with the common meter of the society itself, instead of a separate connection. The single insulated cable which was laid down for over 200 meters was also running towards under construction site. However, at the time of inspection no wire was found to be connected.

The total load booked here is 140 KW. Converted to consumption for a year, this would amount to electricity consumption of Rs. 20 lakh.

“We have been spreading awareness against such activities as they are not only unethical, but also very unsafe and can pose critical threat to users and public in general. People should not only stay away from power theft, but also report such action by sending us a message on Whatsapp at 9437158670,” said a TPCODL spokesman.