Union I & B Minister: Polarising debates pull down credibility of channel 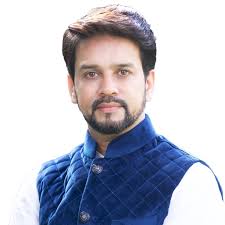 Speaking on the occasion Thakur has said that the biggest threat to mainstream media is not from new age digital platforms, but rather the mainstream media channel itself. He went on to say that real journalism was about facing the facts, presenting the truth and letting all sides the platform to present their views.

Inviting guests who are polarising, who spread false narratives and who shout at the top of their lungs damages the credibility of a channel, the Minister remarked. “Your decisions regarding the guest, the tone and visuals – define your credibility in the eyes of the audience. The view may stop for a minute to watch your show, but will never trust your anchor, your channel or brand as a trusted and transparent source of news”, he further added.

The minister exhorted the broadcasters present on the occasion to not to watch the narrative be defined by soundbites but redefine it yourself and set the terms for the guests and the channel.

Posing prodding questions to the audience the Minister asked “Are you going to watch as the younger audience switches and sweeps through the shrill on TV news or are you going to bring back the Neutrality in NEWS and Discussion in DEBATES to stay ahead of the game?”

Anurag Thakur credited the AIBD leadership during the COVID pandemic for keeping the member countries connected online and maintaining a constant dialogue on how media can mitigate the impact of the pandemic. He noted “member countries were immensely benefitted through sharing of information on the latest developments in the medical field, positive stories of Covid warriors and more importantly in countering fake news which was spreading faster than the pandemic.”

Thakur congratulated Director of AIBD, Philomena, President of AIBD general conference, Mayank Agrawal and the member countries who worked together in building a strong media response to Covid pandemic in the Asia Pacific region.

Speaking on the theme of the event ‘Building a stronger future for broadcasting in the post pandemic era’, the minister remarked that “though broadcast media is and has always been in the mainstream of journalism, the COVID-19 era has shaped its structure in a more strategic way. Covid pandemic has taught us how the right and timely information can save millions of lives. It is media which brought the world on one platform during this difficult phase and reinforced the spirit of one global family. “ Presenting the role of Indian media during the pandemic as a success story, he said that the media ensured that COVID-19 awareness messages, important government guidelines and free online consultations with doctors reached everyone in nook and corner of the country.

Thakur prodded the member countries to set up cooperation in the area of good quality content exchange. Programme exchanges through such co-operation bring the world cultures together. Such media partnerships between the countries help in building strong people-to-people bonds, he said.

In conclusion, the minister underlined that media, in all its forms, has immense ability to shape public perceptions and perspectives as an effective tool of empowerment. “It is imperative to create an enabling environment for our journalists and broadcasters friends for making the space of media more vibrant and rewarding”, he added.

Agarwal highlighted that with increase in use of internet in broadcasting, training of journalists in cyber security journalism has become imperative, he said. He added that AIBD is the first set up to take this up as part of its training programmes.

Heads of various foreign missions in India, delegates from the AIBD member countries, Officers from Prasar Bharati and different wings of Ministry of Information & Broadcasting, Government of India were present at the occasion.

The Asia-Pacific Institute for Broadcasting Development (AIBD) was established in 1977 under the auspices of UNESCO. It is a unique regional inter-governmental organisation servicing countries of the United Nations Economic and Social Commission for Asia and the Pacific (UN-ESCAP) in the field of electronic media development. It is hosted by the Government of Malaysia and the secretariat is located in Kuala Lumpur.

The AIBD currently has 26 Full Members (countries), represented by 43 organisations, and 50 Affiliate Members (organisations) with a total membership of 93 representing 46 countries and regions and over 50 partners in Asia, Pacific, Europe, Africa, Arab States and North America

The AIBD General Conference (GC) and its Associated Meetings is the annual official gathering of the Institute. The General Conference is open to member countries, affiliates, partners, observers and leading broadcasters by invitation only. Member Countries, Affiliates and partners would have the opportunity to review the number of activities and projects that AIBD has implemented for the past year and also look into the future projects. Also discussed is the developmental needs of the member countries.

Ministry of Information & Broadcasting holds the Full Membership of the AIBD. Prasar Bharati , being the public service broadcaster of India utilizes the various services of the AIBD.