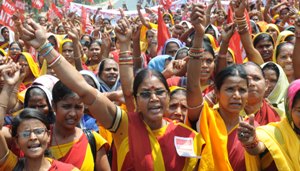 Stating that the Anganwadi workers will also get insurance coverage for health, life and disability, the chief minister said,  “The State government will bear the premium cost.”

The Anganwadi workers in the state were on agitation for the last 36 days demanding Rs 18000 per month salary and regularization of their jobs.