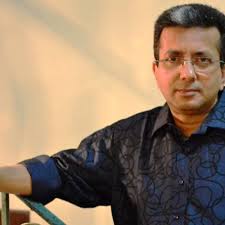 Bhubaneswar: Ruben Banerjee, the editor of India’s leading new feature magazine Outlook is coming out with his second book–Naveen Patnaik. Even though Banerjee’s book is set to be released in August, the content of the book is discussed in the Delhi political circle. Many who have knowledge about the book say that Banerjee’s book fails to decipher the secret of Naveen’s spectacular success in politics.

In the pre-review of the book, Amazon.in says: In this book, the veteran journalist Ruben Banerjee, who has followed Naveen since his early days, decodes the success of the enigmatic politician who stays in the shadows and rarely gives interviews. This is the thrilling story of an unlikely and seemingly unbeatable politician who may well hold the keys to power in the 2019 general elections.

Contrary to Amazon’s claim, the book fails to decode the secret success of the enigmatic politician. The book tries to  put Naveen in bad lights. Naveen is not a gentleman, nor an innocent person as he appear to be, claims the book adding, Patnaik, a ruthless person who never hesitate to crush his potential rivals.

In fact, it is really difficult to unravel the secret of Naveen’s success in politics. A bachelor who lives a recluse life, it is almost impossible to peep into his mind. Ruben was not in Odisha when Naveen’s political career took a steep rise. So, obviously, he would not have the opportunity to read Naveen in right perspective.

Naveen, who spend his prime time in Delhi’s high-society circuit, was sucked into politics in 1997 when his father the legendary politician Biju Patnaik died. A quite stranger to politics, that to Odisha politics, Naveen proved to be a successful politician to rule the state for an all time record of 18 years. Curiously, one may say, Patnaik has lived a natural life during this 18 years. No change in lifestyle. No change in mannerism. A gentle politician who has all concern for his people.

Naveen will remain a enigmatic politician for time to come. Biographers of Naveen like Ruben will continue to grapple to find out the secret of his success.

NB: Banerjee, a journalist of repute has worked for Indian Express and India Today being posted in Odisha for quite some times. It was during this time he had a first person acquaintance with Naveen Patnaik who was learning the art of politics then . Banerjee then left for Doha in Qatar to join Al Jazeera and served the media for 12 years as its online editor. Returning back to India he joined Hindustan Times as its national affairs editor before taking over the baton of Outlook magazine as its editor.

‘Naveen Patnaik’ is Ruben’s second book. His first book is ‘The Orissa Cyclone: A Year of Calamity’, based on the tragedy of Orissa super cyclone in 1999 which killed as many as 10,000 people in Odisha’s coastal districts.