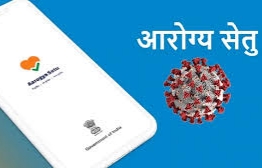 New Delhi: Everybody in Modi government recommend for installation of Arogya Setu App, a contact tracing App in the fight against Covid-19 pandemic. But, nobody knows who created it?

While Aarogya Setu’s website says it was developed by the National Informatics Centre and the Information Technology ministry, both have denied knowledge of who created the App in response to a Right to Information query.

Pushed by the government of India, millions of Indians have installed the Aarogya Setu App, an essential tool in the fight against the coronavirus. The App kicked off a political controversy with opposition suspecting it to be a surveillance tool by the Modi government.

However, now with the NIC and the ministry of IT remaining elusive, the suspicion of the opposition bound to gain ground.

As the NIC a d the MIT giving elusive answers on who created the Arogya Setu App, the Central Information Commission has issued notice to the government.

“Denial of information by authorities cannot be accepted,” the top RTI body says in the notice.

“None of the Chief Public Information Officers were able to explain anything regarding who created the app, where are the files, and this is extremely preposterous.”

The departments concerned have been asked to appear before the commission on November 24.

Activist Saurav Das had complained to the information commission that various ministries had failed to provide information about the creation of the App.

He had asked for details like the origin of the proposal for the app, its approval details, the companies involved, individuals and government departments included, and copies of communications between private people involved in developing the App.

Over a period of two months, the query bounced off various departments.

The National Informatics Centre reportedly said that the “entire file related to creation of the App is not with NIC”.

The IT ministry transferred the query to the National e-Governance Division, which said: “The information sought is not related to (our division).”

The information commission questions in the notice why the government should not face action for “prima facie obstruction of information” and giving an “evasive reply” to the RTI application.